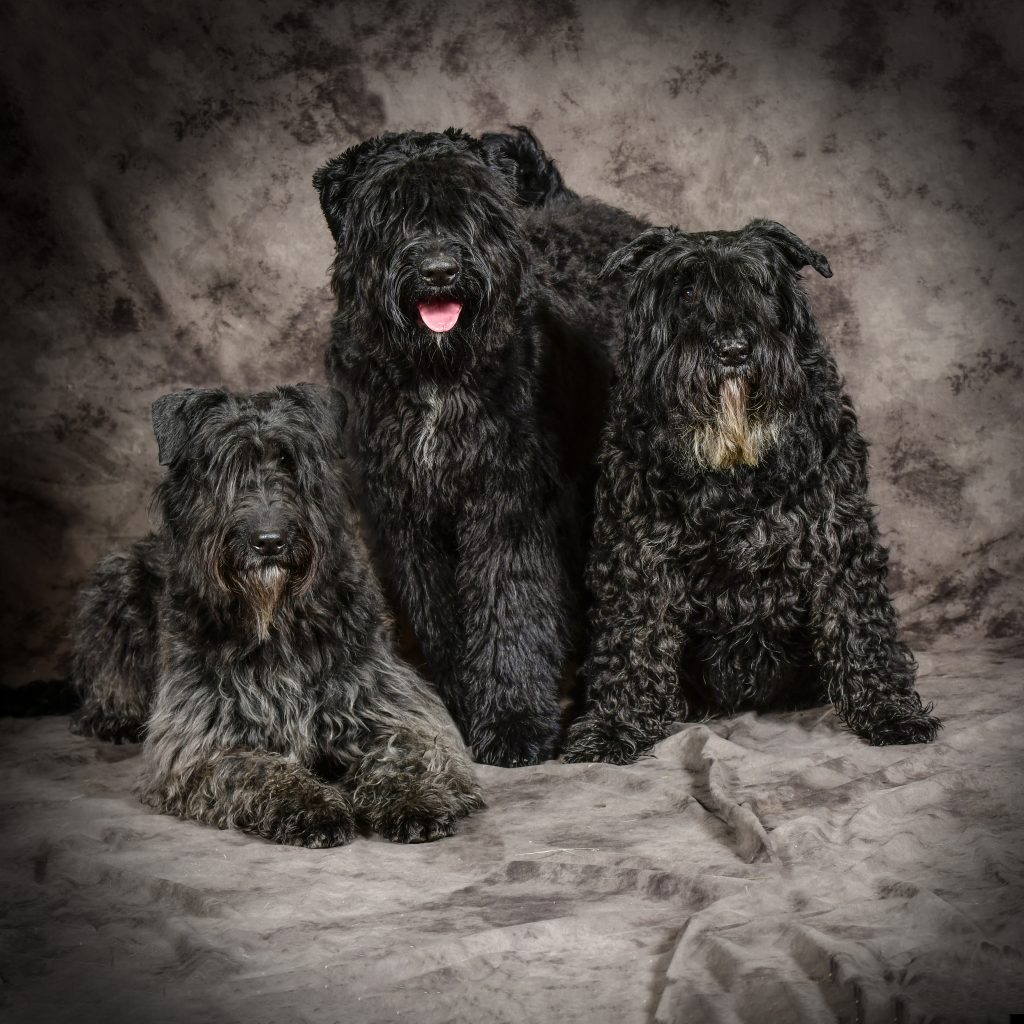 In 1987 I bought my First bouvier (dog) at kennel Van de Hapandahoeve, owned by Dick and Jannie Gottmer from Poeldijk (NL).

I came in touch with this bouvierkennel because I trained with my German Shepherd bitch Lady, who had no pedigree, at Working Bouvier Group The Hague, where Dick was a trainer. Taran was a beautiful bouvier that won various Excellent placements at international exhibitions. He achieved the working certificates AD, BH and IPO 1, 2 and 3. Unfortunately he was not suitable to enter in trials.
Because Working Bouvier Group The Haque stopped, I started training at Working Bouvier Group Amsterdam where Fred Samseer was a trainer. There I came in touch with Bouvierkennel Casa de Mandingo’s of Fred Samseer work and Carla van Duijvenbode. Fred and Carla are now successful trainers at Dutch East Dog Training Center in the U.S.A.

When Lady at one point appeared to have serious hipdysplasia and I had to stop training her immediately, I bought the last female from kennel Casa de Mandingo’s ‘H’-litter, born on 5 February 1991. This was Hurricane Jane Casa de Mandingo’s, calling name Jane.

Jane was a fantastic bouvier, with the right character and temperament, but was also very beautiful. With her I achieved many successes on both the work and show grounds. At the end of 1994, I have requested the kennelname ‘Van Aqualand’ and on 27 March 1995 is the first ‘Van Aqualand’ bouvier litter was born.

Jane is the ancestress of ‘Van Aqualand bouviers’ and she gave me 2 great litters.

Unfortunately she died much too young at the age of 7 years as a result of a fatal train accident on June 29, 1998. This was a huge loss for the kennel, but fortunately she laid the beginning for a successful line ‘Van Aqualand’ bouviers. Several of her offspring achieved lots of successes on both the work and show grounds.

Because our goal is to breed a ‘complete’ bouvier, which at the inside (character, temperament, working desire etc.) as well as at the outside (beauty) follows the bouvier prototype, it is hard to find the right (parent) combination.

A bouvier can’t be just beautiful or just be a good working dog, a bouvier has to be the combination of both. Much to my regret this is not the goal of every bouvier breeder, but it sure is the goal of ‘Van Aqualand bouviers’.

With my breeding bitches I regular visit (inter)national dog shows at home and abroad, where they achieve excellent results. Several of the dogs bred by me are (multi) beauty champions.
Bouviers bred by me find their way all over the world (Belgium, Germany, Denmark, Finland, Russia, South-Africa, U.S.A., Canada).

If you have any questions or if you want more information, please contact me.